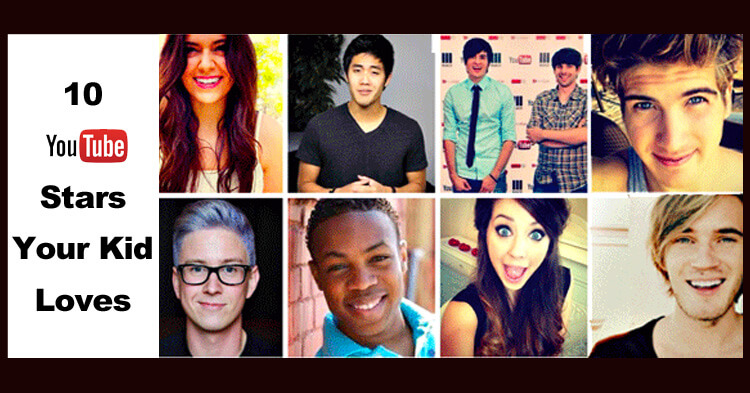 You’ll be forgiven if you think Smosh sounds like something you do to a bug and PewDiePie is a new kind of dessert. These — and lots of other names you’ve probably never heard of — are some of the hottest celebs in the entertainment industry. But you won’t find them on TV or in the movies. They’re the stars of YouTube, and with every video they upload — in formats as wide-ranging as musical performances, skits, personal confessions, advice, and philosophical monologues on the state of the Internet — they’re attracting kids and teens like crazy.

That their parents have no idea who these folks are is a major draw for kids. YouTube personalities become popular because they speak directly to their fans, with no network oversight, no whitewashing of their language, and no fancy production. They say what they want. They’re real. But given that these folks are making big bucks off their YouTube channels — and making a huge impression on kids — it’s important that parents get clued in to who they are.

If your kids are interested in specific topics (guitar, Minecraft, astronomy, current events, and so on), they’re sure to find YouTubers whose videos focus narrowly on those subjects. This roundup is an overview of some of YouTube’s most popular general-interest personalities (with a few exceptions of extremely popular category-specific stars who’ve attracted crossover fans).

Felix Arvid Ulf Kjellberg
Channel: PewDiePie
Subscribers: Over 30 million
The basics: PewDiePie rhymes with “cutiepie” (he also goes by “Pewds”).
The shtick: What this Swedish YouTube star does — real-time game commentary — sounds ridiculous to most parents, but he has more followers than Rihanna. His narration of on-screen action, prolific posting, and colorful remarks (mainly about horror video games) consistently pull in the biggest audiences on YouTube.
Red flags? Graphic imagery and strong language are the chief concerns. PewDiePie certainly rides the edge, but he’s not mean-spirited (except to his opponents). Humor is the goal, not shock and awe.
Don’t miss: PewDiePie is a huge supporter of the Save the Children charity and has galvanized his “bros” to raise money and awareness for the campaign.

Ian Andrew Hecox and Anthony Padilla
Channel: Smosh
Subscribers: Over 18 million
The basics: Silly skits, funny songs, crazy costumes, cute haircuts, and loads of charm.
The shtick: Their grab bag of scripted scenes, improvisation, and just themselves accepting wacky challenges have propelled the twentysomething comedy duo to Internet fame and, yes, fortune.
Red flags? Smosh is unpredictable and not above bathroom humor, but swear words are bleeped out. The comedy isn’t necessarily highbrow, but it’s mostly harmless.
Don’t miss: The “Parents Suck” video about kids escaping their parents’ rules is really about how important parents are.

Ryan Higa
Channel: NigaHiga
Subscribers: Over 12 million
The basics: Bright, telegenic native Hawaiian famous for his “off the pill” rants, which he claims are the result of not taking his medication.
The shtick: Higa loves creating parodies of movies, ads, and songs, and he has a strong bent for personal confession and articulate — although one-sided — tirades on ethical or topical subjects that he performs facing the camera. His video technique is a cut above the usual YouTube fare.
Red flags? Higa enjoys ranting — but the tone is more faux outrage than real anger, and his goal is often to point out hypocrisy.
Don’t miss: Higa’s “Draw My Life” video is unexpectedly poignant, describing how he overcame feelings of inadequacy and getting bullied.

Bethany Mota
Channel: Bethany Mota (formerly Macbarbie07)
Subscribers: Over 7 million
The basics: Teenage pioneer of “haul” videos — basically shopping and describing what she’s bought.
The shtick: Fashion, beauty, shopping, and DIY tips all wrapped up in a bubbly voiced, fresh-faced, and charmingly self-deprecating package. Mota, who won a 2014 Teen Choice Award, typically broadcasts from her bedroom, which, with its abundant-seeming sunshine, colorful accessories, and strings of pink hearts, is a teenage dream. She makes personal appearances and calls her fans “Mota-vators.”
Red flags? Mota is squeaky-clean, but she does shill for her line of Aeropostale clothing and accessories, so expect trips to the mall if your kids are fans.
Don’t miss: Mota will be appearing on Season 19 of Dancing with the Stars.

Shane Dawson
Channel: Shane DawsonTV
Subscribers: Over 6 million
The basics: Blond-haired, blue-eyed Californian with a sad past (abusive father, bullying victim) will pretty much do anything for a laugh.
The shtick: Colorful characters, outrageous songs, edgy videos, and funny first-person vlogs make this ubiquitous YouTuber (he frequently appears on others’ YouTube channels) known for fearless comedy a big hit with teens. Dawson clearly has ambition beyond YouTube, and his racy-looking feature-length movie Not Cool is releasing online in September 2014.
Red flags? Language (he recorded a song called “F–k Up”) and drug and sex references are staples of his work.
Don’t miss: Though he likes to be outrageous, he also raises money for anti-cyberbullying efforts.

Tyler Oakley
Channel: Tyler Oakley
Subscribers: Over 5 million
The basics: Out-and-proud advocate for the Trevor Project and winner of two 2014 Teen Choice awards has a strong social media presence across the Web.
The shtick: With his vertical, colorfully dyed hair and black-framed glasses, Oakley gives off the sensible-yet-caring persona of the cool college resident advisor he once was. His lively, humorous videos typically feature special guests (mostly his friends or other YouTubers) and have a self-described “fangirl” vibe — his review of the Kim Kardashian: Hollywood app was, at one point, the most popular video on YouTube.
Red flags? Frequent f-bombs and blunt sex talk are peppered throughout many videos.
Don’t miss: Oakley’s “I Had a Vision of Love” video, which walks viewers through his life goals, can inspire kids who feel directionless.

Zoe Sugg
Channel: Zoella
Subscribers: Over 5 million
The basics: Bubbly British vlogger whose comprehensive reviews of beauty products and hair and makeup tutorials have led to her renown as a lifestyle expert.
The shtick: With big blue eyes, loads of personality, and charming British-isms (she says “fringe” for “bangs”), Zoella has attracted a huge fan base of young girls — and advertisers — as much for her encyclopedic knowledge of beauty products as for her Mary Poppins-like homespun wisdom.
Red flags? The channel is unapologetically about the joys of shopping, and, consequently, Zoella has advertisers eating out of her hand.
Don’t miss: Found footage of an amazingly prescient, pre-YouTube Zoella videotaping herself packing for a trip shows her fans that this vlogging stuff really wasn’t a fluke.

Joey Graceffa
Channel: Joey Graceffa
Subscribers: Over 3.9 million
The basics: Aspiring actor who has vowed to post a YouTube video every day.
The shtick: Handsome, earnest, and funny, Graceffa is one of YouTube’s first vloggers to hit the big time: He’s appeared on two seasons of The Amazing Race. Most of his videos are straight-up vlogs — just him talking and mugging at the camera — but he also puts up highly produced content, including a Web series called Storytellers. The guy really gets around: He does guest appearances all over YouTube and usually adds a humorous — if not particularly stimulating — presence.
Red flags? Graceffa’s content is pretty mild. In fact, much of it seems like its self-promotional stuff he can use for auditions.
Don’t miss: In his “Draw My Life” video, Graceffa explains how he overcame obstacles such as an alcoholic mother, an absent father, and a learning disability.

Nash Grier
Channel: Nash Grier
Subscribers: Over 3.5 million
The basics: Cute teen from North Carolina is cleaning up on YouTube, but he’s killing it on Vine, with 9 million subscribers for his six-second vids.
The shtick: Boy-next-door looks combined with wry observations of high school life make Nash’s videos magnetic to teen girls. He often features his friends in his videos, making it look as though he’s leading an average, everyday American life. He’s a self-proclaimed God-fearing Christian.
Red flags? Nash has had to apologize for comments that were seen as racist, sexist, and homophobic.
Don’t miss: Recently signed to YouTube’s AwesomenessTV, you can expect bigger and better content from this self-made star — and that includes sponsorship deals with premium advertisers.

Todrick Hall
Channel: Todrick Hall
Subscribers: Over 1 million
The basics: A quadruple threat — singer, dancer, actor, writer — beloved as much for his outrageous skits as for his honest, straightforward vlogs. Also has a dyed-pink poodle.
The shtick: An irrepressible spirit, an irresistible smile, and undeniable talent have made Hall one of YouTube’s biggest success stories. The former American Idol contestant’s channel is heavy on the gay and racial humor. His infamous “Cinderfella” video featuring supermodel Janice Dickinson and former Nsync member Lance Bass was a pro-gay marriage extravaganza complete with a light-up stagecoach.
Red flags? Though not necessarily graphic, his videos alluding to sex (“Twerking in the Rain”) and race (“Weavegirls”) skew toward an older audience.
Don’t miss: The guy can’t be missed. He has an ad campaign for Target, which shows off his gift for lively improvisation, and a live road show, Twerk du Soleil, which may just come to a theater near you.

ABOUT COMMON SENSE MEDIA: Common Sense Media is dedicated to improving the lives of kids and families by providing the trustworthy information, education, and independent voice they need to thrive in a world of media and technology. We exist because our kids are growing up in a culture that profoundly impacts their physical, social, and emotional well-being. We provide families with the advice and media reviews they need in order to make the best choices for their children. Through our education programs and policy efforts, Common Sense Media empowers parents, educators, and young people to become knowledgeable and responsible digital citizens. For more information, go to:www.commonsense.org.