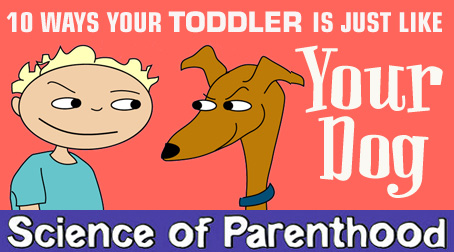 Cute, cuddly little mischief-makers, toddlers truly are the puppies of humanity. As I watched my dog take off after one million bunnies on our walk this morning I thought, “You know, that dog is like a lightening-fast toddler, with about as much common sense.” And as I stumbled through the field after him, cursing and shouting the dog’s name, those toddler/canine similarities just kept coming! It hit me how similar toddlers and dogs really are …

1. They will both put just about anything in their mouth.

2. Both are given to dramatic rejections of “unacceptable” new food.

3. Brushing their teeth is an exercise in futility.

Just try to get the brush in there for a few minutes… NO, don’t EAT the toothpaste! A few half-hearted swipes … okay, that’s probably good enough.

4. They will both maintain intense, unwavering eye contact while pooping.

They know this is what we really want: those beautiful brown orbs. Why else would we be so eager to pick them up, package them tenderly and carry them around? We’ve done everything in our power to prove that, to adult humans, poops are as precious as gold.

The higher-pitched the better … and the more likely that it will be the ONLY toy of interest at 5 AM.

6. They are both DYING to get their mitts on that fluffy kitty.

7. Both are perfectly happy to eat an entire meal directly off the floor.

In fact, they prefer it. Everyone knows that’S where the tastiest most-forbidden morsels are found. Dog hair and dust bunnies are the condiments of the under-four-foot set.

8. They are secretly trying to kill you by constantly being underfoot.

Ever hopeful that some forbidden treat will drop down to their level, they lie in wait. If they aren’t actively attached to your leg, they stealthily sneak up to stand six inches behind you. This is the only time they are capable of maintaining absolute silence. Ok, maybe they aren’t actively trying to kill you, but they definitely want to get you down to floor level so they can delivery many, many sloppy, wet kisses.

9. Untethered, their paths are impossible to predict.

What’s that smell? Is that a rabbit? What is that shiny thing? Is that a TRUCK?? ZOMG, THAT IS A TRUCK!! LETS GOOOO!

10. They both understand a lot more than they let on.

Sometimes you can just tell by the look on either of their adorable little faces that they totally know that what they just did was wrongity-wrong-wrong … and are making plans to do it again as soon as possible.

There must be more, What have we missed?