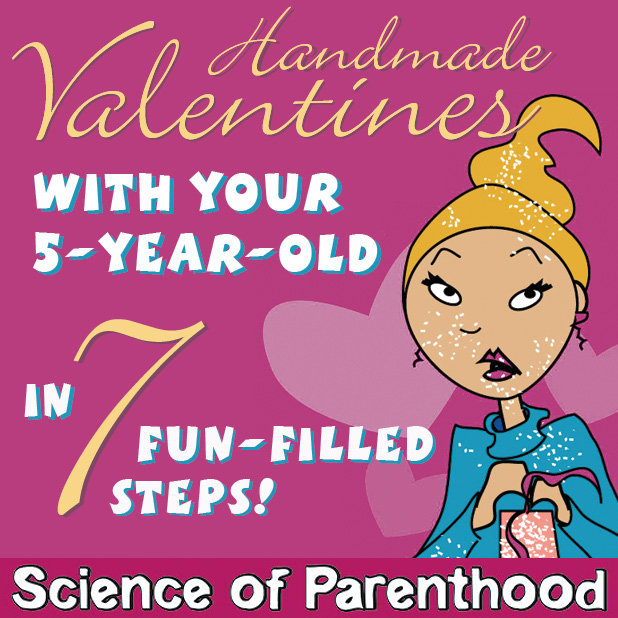 Valentine’s Day! The perfect opportunity to exorcize your pent-up craft-making demons. It’s been WEEKS (maybe) since you packed away your handmade Christmas ornaments, we know that glue gun has been burning a hole in your craft holster. Spending a “leisurely” afternoon crafting with your five-year-old ought to put those demons to rest, just follow these 7 easy steps…

Step 2:
Blow $50 at the craft store:  $20 on necessary supplies and an additional $30 on cute stickers and glitter she INSISTS she needs. Ignore the fact that store-bought cards for 30 kids would have run about $10.

Step 3:
Set up your craft station, aka Production Zone, and outline the plan to your 5-year-old.

Step 4:
Within three minutes, realize that any sort of “plan” was pure fantasy as your 5-year-old spends the next 20 minutes covering the first card with 80 stickers and an inch of glitter glue; declares she’s “done” and gets up to leave.

Step 5:
At this rate you will need two months to finish 30 cards. Steer her back to the table and kick into high gear. Begin furiously shuffling fresh cards in front of her like a blackjack dealer in an attempt to get at least one child-made mark on each card. Sensing you have less than five minutes before a craft-induced meltdown, break out the stamps (even though they are Christmas themed), arm her with one in each hand, spread out the remaining cards and direct her to stamp away! Whack-a-Mole style.  Bribe her into signing a total of four cards before giving up completely.

Step 6:
After she goes to bed, open some wine and complete the rest of the cards.  Toast your whimsical composition and fresh color palette. Decide that you have truly missed your calling as a powerhouse Pinterest craft-blogger; make a mental note to tweet pictures to @thistlewoodfarm. Consider misplacing her cards in favor of yours.

Step 7:
The next day at the class party, notice several children have clearly signed all their own cards. Tell yourself that they began their cards right after Christmas.