Reflecting Upon the Holidays by Debbie McCormick of Wrinkled Mommy 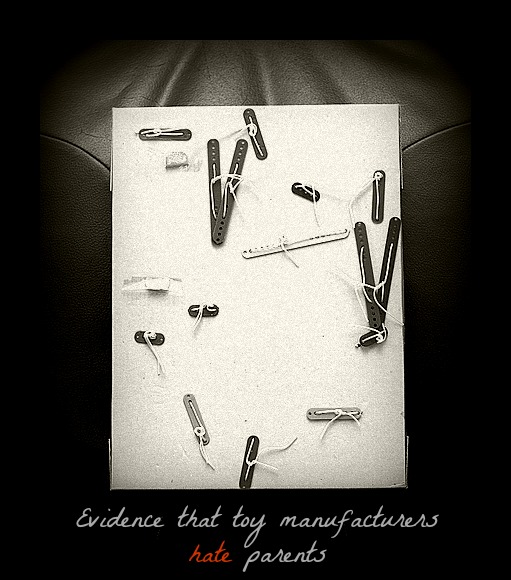 Reflecting Upon the Holidays

~:: by Debbie McCormick of Wrinkled Mommy ::~

Now that we are past the holidays, I have time to sit and reflect on important things that are…well, worth reflecting on. I pour myself a cup of coffee, wade through the remnants of torn wrapping paper still on the floor, and step over the hundreds of small toy parts that are already on the way to becoming indefinitely lost.

I sit down in my furry robe and comfy socks and think of the fun moments with family, the taste of that glorious fudge that I ate too much of, and then of a few more complex things.

Why hasn’t anyone updated the seven wonders of the world yet? A lot has happened since the middle ages.

Who was the first person to try fish eggs and was this person the one who named it Caviar?

Why do slivers of soap not lather as well as a brand new bar?

And lastly, the biggest mystery of all: Why do toy manufacturers treat parents like crap?

I would like to know what happened that caused the toys we buy with our hard earned money to be wired, zip tied, sewn, bolted, and screwed into the box? On Christmas morning, moms are all, “Honey will you open this please, I can’t get into it.” And dads say, “Sure, just lay it down with the rest of them.” And the kids are all frustrated because they are sitting there trying to play with a toy while it is still cemented to the packaging because it has been 20 minutes SO FAR and their gift is still third in line for processing.

Then dad is all, “What?! This dang toy is screwed into the box! I need a screwdriver!” And Mom says, “OK where is it?” Dad doesn’t know and sends mom on a ‘find the screwdriver hunt’ while kid is brooding, still holding his dinosaur that can’t roar because its mouth is zip-tied shut. Mom comes back with a screwdriver. Dad grabs it and tries to hurry up and get this painful experience over. Then he’s all, “What?! This screwdriver is a phillips-head and the screw is a flat head.” Mom sighs and informs dad that it was the ONLY SCREWDRIVER HE HAD and she couldn’t find anything else. Then dad says, “Well somebody took it because I KNOW I put it with the other one.” Mom thinks to herself that he can never admit when he is wrong and then she sees a penny on the counter and says, “Here, try a penny to turn it.” Dad tries but the penny edge is too wide. Kid is sadly squeezing dinosaur’s tail as he slumps, defeated, in a chair looking forlorn at the floor. He gets a faint, tired squeak…merrrrr….merrrrrr…. from the air coming through it’s zip-tied mouth and decides to just play with it like that, so he grabs the box and runs to his room.

Meanwhile, Dad finally frees the arms and legs of the other kid’s doll and tries to pull it out, only to notice it snaps back against the cardboard. The body is free, but the head is not. He then sees that the hair is sewn to the cardboard box. He mutters, “What the crap?!? Who would sew hair to a box?!” He grabs the household scissors while mom shrieks, “NOOOO! You can’t use THOSE! You will cut off the hair!” Dad sits there staring after her with glassy eyes as she runs to find a pair of tiny scissors from her sewing kit and carefully snips the tiny threads, trying her best not to cut off any of the long shiny tresses of kid’s brand new doll.

Opening the gifts takes 15 minutes. Removing all the packaging takes over an hour. I don’t know…it just seems like there could be a better way. I finish my coffee, sigh, and just take in all that is around me. And then I think, At least I have six months before it’s time to do this all over again for birthdays. And then I think…

ABOUT DEBBIE: Debbie blogs at Wrinkled Mommy about life and parenting. She uses humor and illustrations frequently in order to explain the chaos that occurs from being a mom of six, including one set of triplets.

She left her corporate Senior Account Analyst career, to stay home and be a servant to her insubordinate offspring. In her spare time she enjoys…never mind, she has no spare time.

This post was written by Debbie McCormick of Wrinkled Mommy exclusively for Bonbon Break Media, LLC.