Get Lost!: a mother’s advice by Arnebya Herndon of What Now and Why? 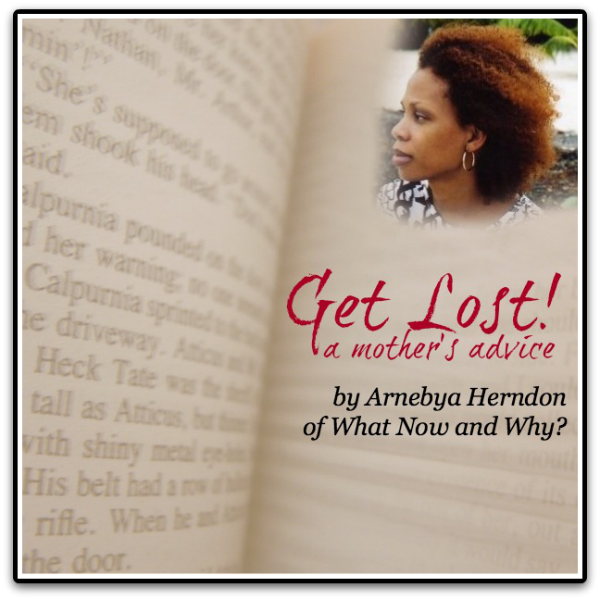 When I was 15 I told my mother I’d read every book in the library and I didn’t think I was being dramatic at all like she claimed. It was the weekend, the library was closed, and I’d finished the 12 books I’d checked out the week before. I remember my mother rolling her eyes and walking away. But a few minutes later, she came into my room and threw a paperback book on my bed. “You’re ready for this, I think.”

I was both ready and wholly unready. I still can’t believe that the woman who told me hickeys give you neck cancer and looking at a penis straight on makes you blind gave me a book that had such detailed sex scenes. There was talk of orgasm and multiple partners and the use of, well, foreign objects for pleasure. Needless to say, I finished that book within 24 hours: Juffie Kane. I’ve never forgotten it. In fact, I kept it for years, rereading it, never tiring of the story. It was more than the sex, though. It was the story itself, and the writing. The real life feel of it. It was relatable while still fully fictional.

My mother saved me that weekend. I’d like to think I did the same for my oldest daughter recently. Like me, she is a reader who must always have a book to read. She cannot leave the house without a book. Often, I’ll look for her in the house and will have called her a few times. But she’s so engrossed (or purposely ignoring me) that she doesn’t answer. The power of a book takes over her, she gets lost, and it makes me smile in recognition. A couple of years ago she complained about the lack of books, claiming to have read them all. It sounded familiar. Since  I’ve always been a mild book hoarder, I was glad to open the rarely used closet to go through a few boxes.

Pay no attention to the Christmas wrapping paper on the bottom left. It’s inconsequential as it’s been there since 2008, I’m sure. If you’re going to mention it, I’d like you to at least come throw it away.

I gave my daughter my entire Judy Blume and Beverly Cleary collections out of those boxes. Not long after, she needed a book for school: Roll of Thunder, Hear My Cry. It was checked out at the libraries citywide because it was required reading. But it was in the box in the closet. The look on her face when I gave her that book, with my name and 1979 written in it was priceless. Her teacher was equally warmed by it, writing me a note that said she nearly applauded when she saw the original cover. See? Hoarding isn’t so bad.

Recently, though, I’ve gone into the boxes to see what’s age appropriate for my girls now. There’s not much. Although my oldest daughter is a mature reader, I don’t think she’s quite ready for some of the themes. Namely, Toni Morrison’s The Bluest Eye and Alice Walker’s The Color Purple and Meridian. When did I get rid of V.C. Andrews’ Dollanganger series?

This anthology has works about slavery and freedom, Reconstruction, the Harlem Renaissance, and more. While I want my children to be knowledgeable about black history and black authors, I don’t want to limit their exposure.

One box has books by Jane Austen, J.D. Salinger, and Zora Neale Hurston. Another has Dickens, Frederick Douglass, Louisa May Alcott. There are books I can’t wait to discuss, books that they’ll  likely read well before they’re required in school (like my oldest did with Harper Lee’s To Kill a Mockingbird last year).

I giggle that quite a few of the books are on the banned books list. I am proud of these books, these authors, glad I’ve held onto them even though they’re all still available in some form. What I’m looking forward to most, though, is finding a copy of the out of print Juffie Kane. I can’t wait to tell her she’s ready, proving that there is never an end to the books, always another chance to get lost.

This piece was written exclusively by Arnebya Herndon of What Now and Why? for Bonbon Break Media, LLC