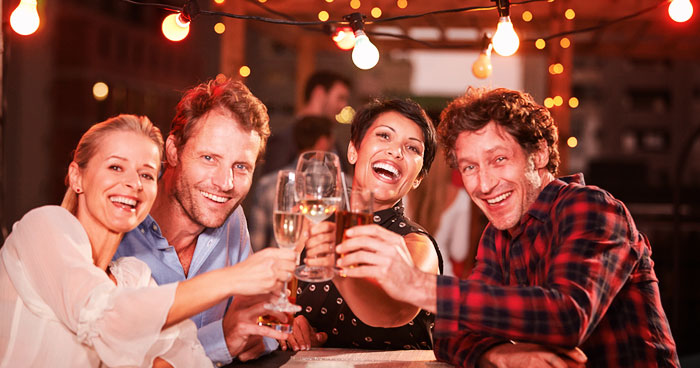 As Fall approached, I knew the invitation for my 20 year high school reunion was coming. I had every intention of going. My hometown was just a five hour drive away, but when the date was announced – the weekend before a huge deadline at work – I wondered whether it was practical, or even possible, to attend.

The date drew closer, and I stressed about work and family commitments. I considered not going. After all, I was friends with most of these people on Facebook. It’s not like I hadn’t kept up with them for the last ten years.

RSVP numbers for the event were dismal. Less than 10 percent of our graduating class was coming. Even more reason to not bother, but I bought tickets anyway.

As the weekend drew near, I wondered if it would be worth it. Would it be boring? Awkward? Would I see more than a handful of people I remembered? Would everyone think I looked fat and old? Trying to remain positive, I told my husband, “If nothing else, at least we’re getting a date night, right?” He looked skeptical but remained supportive.

Arriving at the venue, we immediately ran into a friend I hadn’t seen since our 10 year reunion. We hugged and quickly slapped on our name tags, then joined a few more friends who’d arrived just ahead of us. Even after all this time, conversation flowed easily.

We got drinks from the bar as more classmates started arriving. For every conversation I had, I’d see another face across the room that I wanted to greet. I was drawn into conversation with a popular cheerleader, now a school teacher. We probably hadn’t exchanged two words during four years of high school, but I complimented her shoes and we spent several minutes talking about kids and careers.

Another friend, who’d worked with me at Burger King all through high school, arrived. We took a photo together, uploaded it to Facebook, and tagged another classmate not in attendance. Immediately my phone started buzzing with comments from her, wishing she was there.

I chatted with the student-body-president-turned-eye-surgeon. He asked about our family, and we told him about our three year old. “Take it from me,” he said, “I have six kids. Family is everything, but your marriage is most important. Have a date night every week.” After I finished reeling at the thought of having six kids, I acknowledged how right he was. Tonight was our first date night in well over a month.

Too soon, it was time to say goodbye. I’ve heard that high school classmates are like war buddies. It doesn’t matter how much time has passed since you last met. You went through something together, and you are always connected. I really understood that sentiment after 20 years. Nobody cared if we’d gained weight or had wrinkles. Nobody cared who moved and who stayed, who was a doctor and who left a career behind to care for family.

Facebook is a great way to keep in touch with family and friends when you can’t be together, but it’s not a replacement for real, human connection. We may think that we know what people are up to, even though we haven’t seen them in person in a decade or two, but nothing replaces a face-to-face conversation. Liking a Facebook update isn’t the same as giving a hug.

Life is busy. We’ve got kids and jobs, errands to run, soccer games to attend, taxes to prepare. When the reunion invite comes, it’s easy to dismiss it as just another chore in an already busy life. Don’t dismiss it. We were there during each other’s most formative years. You may feel old. You’ll definitely feel mortal. It’s worth it.

Why I Don’t Have (or Want) a Best Friend Forever

Janet Berry-Johnson is a writer and CPA living in Scottsdale, Arizona. When not working or enjoying family time, she loves cooking, hiking, reading historical fiction, and has a not-so-secret obsession with Real Housewives and Downton Abbey.
Next Article